Metamorphosis Quilt: An ode to Escher

Back in September (last year, eek!), Julie from The Intrepid Thread put out a call for participants in a challenge she was hosting.

The deal was: would send the participants some fabric (for the sake of transparency, it was provided for free) and then everyone had a few months to make whatever they wanted with the fabric and unveil their work in January.

My nifty package arrived a few weeks later and my brain started whirring. What was I going to make?


Going off topic for a minute....when I was at uni I did a math degree and one of the subjects was called Topology and Chaos. One of the assessments in that subject was to write an essay about anything to do with Chaos Theory and applications of it in the world (I guess they wanted literate math grads). Anyway, whilst everyone else was off writing essays about using Chaos Theory to predict the weather or the stock market (yawn...), I wrote about chaos in art. This was when I first came across the work of M.C Escher whose work has a fractal like elements and also the Sierpinski Triangle you will recognise from this quilt.

Anyway....back to my whirring brain. Something about the challenge, or point in time or something completely random made me think of the works of Escher and so I spent an evening googling various Escher works and trying to find something that would translate into a quilt (that was achievable with my skill level in the time frame). Finally I landed on the work Metamorphosis III as my inspiration.

I also supplemented the fabric with some black solid and Kona Snow as well as some grey / black scraps I had in my stash.

I am a realist, I knew I was never going to be able to replicate Escher's work in fabric form, so I decided to pay homage to the concept of metamorphosis in both the shapes morphing from one to another as well as the graduation of colour from white, through to grey, black and then back to white. In the centre as I went from the "square" side to the "triangle" side (that's that math degree in action there) I wanted the quilt to appear to burst apart with a large floral applique. For the floral explosion I used the Arrows as well as some of the new Karen Lewis fabric, some AMH flowers and a C+S print that had some neat flowers as well as hummingbirds.

As I was piecing, it became apparent that this was going to be much larger than the table runner sized piece I had in my mind. I decided to turn it into a queen sized quilt for our bed by attaching two large panels in Snow to the top and bottom. The finished top is approx 84" x 92".

I am going to send this baby out to be quilted as I don't think that I would be able to do justice to it - I have never quilted anything larger than a King Single and I didn't want to practice on something that I love so much.

This quilt really means a lot to me for a lot of reasons. Firstly, I feel like it really reflects the sort of thing that I like to create. Despite having a very solid inspiration, this is a quilt entirely of my own design. And I tried so many new techniques that it was real unchartered territory for me.

The wonky square / diamond section I drew by hand on cardboard and cut it up and hand pieced it. I had to work out how to attach that to the machine pieced square patchwork. The centre is raw edge applique, which I had never tried before (who knows if I did it right, it might all fall apart first wash!). I sewed triangles for the first time (technically I did in my Sierpinski quilt, but I paper pieced those). And I sliced and diced and improved that last triangle section (in a totally 60 degree way).

So I love this quilt. I am proud of it and myself and what it represents. I can't wait to have it quilted, bound and on my bed.


Thanks to Julie for the chance to participate in something that forced me to think beyond what everyone else was doing and to create something that was a true reflection of myself. The other participants have also made some fantastic pieces - go check out the hashtag #intrepidthreadchallenge to have a look.
Posted by Peaches1003 at 21:31

I love getting comments! Feel free to say hi. I'll do my best to reply back - sometimes work and chasing after Moo & Bird might make me tardy. 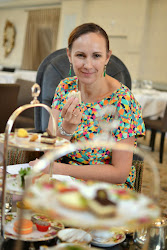 Peaches1003
Number cruncher by day, sewer by night; this is my blog about my adventures in sewing land. Mummy to Miss Moo and Miss Bird - they keep it real